Mirrors reverse realities, depending on the size of the frame through which you view an image of the mirror – it can seem real, or it can seem like a reflection. As the reflection is itself not a place we can enter. As such it is a good paradox that is reflective of how we use, view and sometimes compare our lives through social media.

““Me Me Me Generation, here are a few basic facts: the National Institutes of Health reports that the incidence of Narcissistic Personality Disorder is three times as high for people in their 20s as for folks 65 or older; 58 percent more college students scored higher on a narcissism scale in 2009 than in 1982; 40 percent of millennials believe they should be promoted every two years, regardless of performance; and the obsession with fame among the young is apparently so superheated that three times as many girls 11 to 13 want to grow up to be a celebrity’s personal assistant instead of a US senator.”

Why the Art World’s Raging Narcissism Epidemic Is Killing Art

In this series, I am not so much interested in my identity, but more the notion we have chosen to use bathrooms – private – to project a vastly public image into the world through social media. The way we construct ourselves in these selfies that we push out into the world is fascinating!  The self-consumed nature of it is referenced by the titles which highlights the world news – and arguably much more important – events that are happening while we focus inwards.

As my new series of paintings explore, sometimes it is hard to tell are we looking at a real space, or a space in a mirror – reality / reflection. 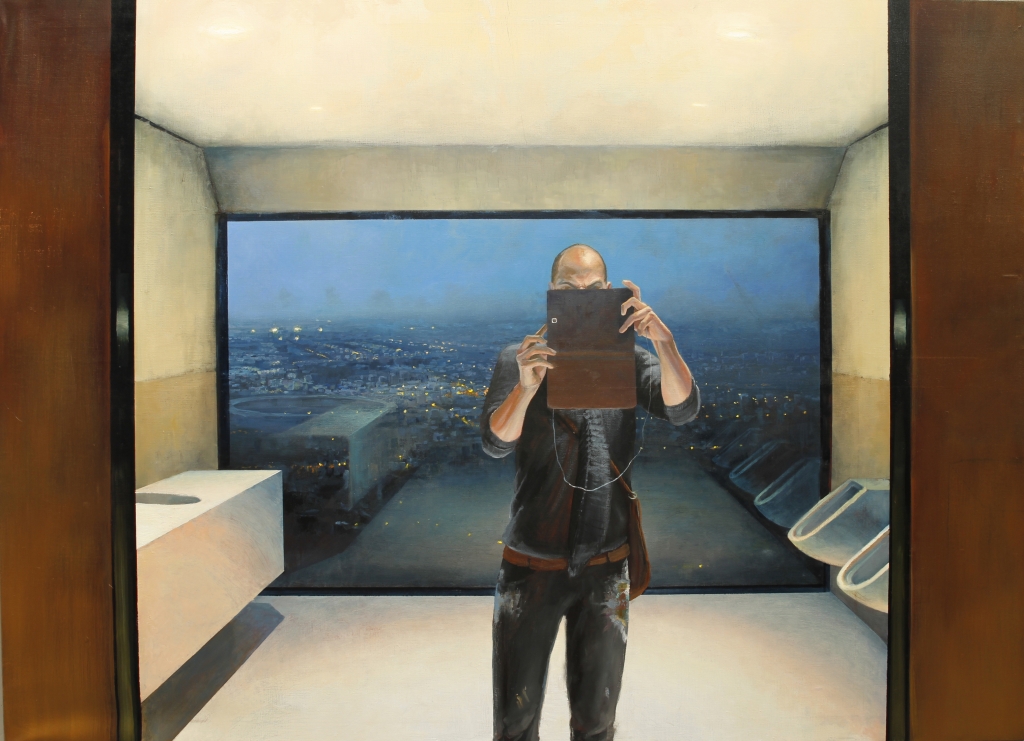 In the above image, the viewer is uncertain as to whether they are looking into a room with someone photographing them – or are we looking at someone’s self portrait taken in a mirror within the room behind the subject? This question becomes even more confusing when standing in-front of the painting and taking a photo of it through a tablet, or smart phone similar to the one in the photo. The experience is unusual and reality bending. 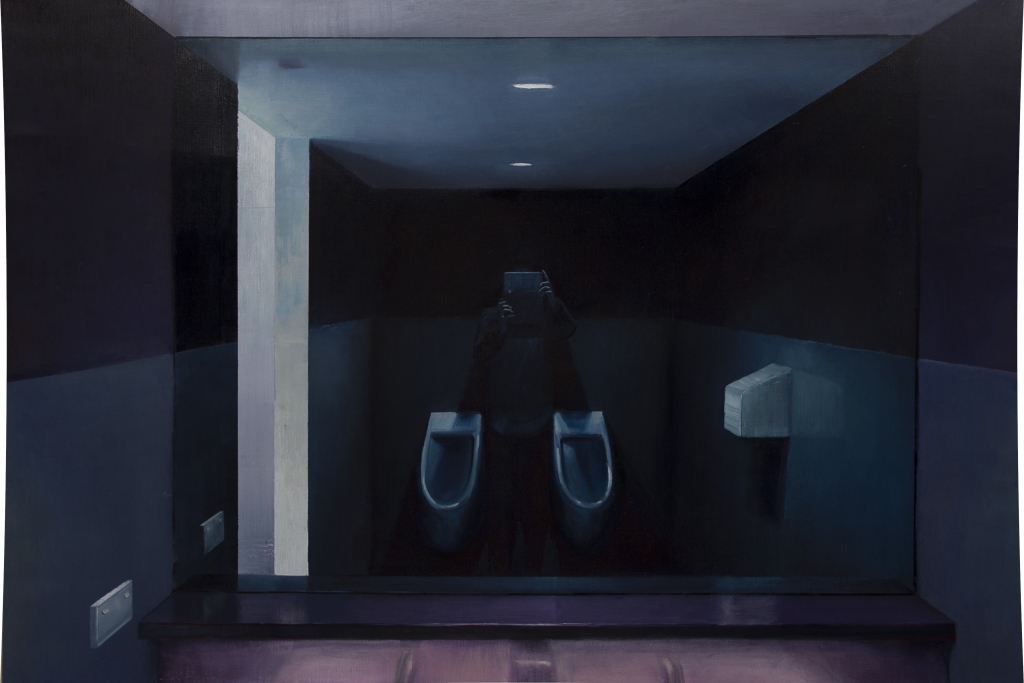 The works tackle identity, communication and alienation in a self-promotional era. The majority of the paintings being painted in Public bathrooms in front of the mirrors with the urinals, or as the laconic title “Pissers” is a tip of the hat to my tendency to take the piss – both out of others yet mainly myself – something which identifies distinctly as Australian and nods to my upbringing on a rural farm in Victoria. These works are serious, and seriously taking the piss. Again there is a duality. 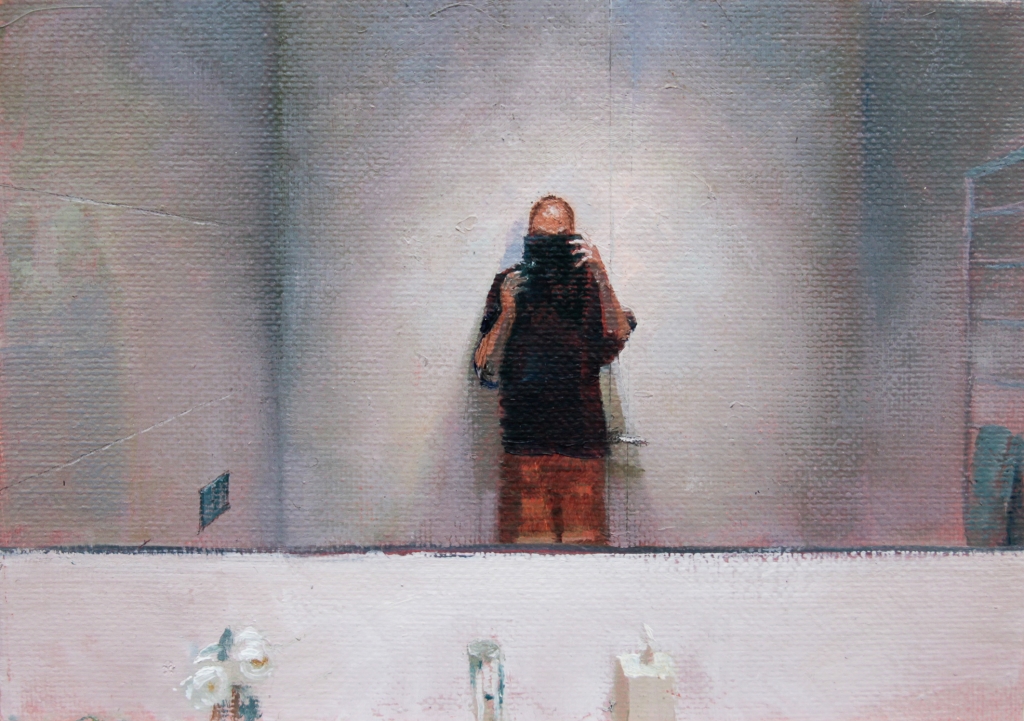 This series all started on returning from Africa, I broke my ankle and when I returned I aimed to start plein air painting the urban-scape of Melbourne, however I found after the injury heading out around Melbourne with crutches and a car that had been written off was impossible.

So it began – For me, the bathroom is a private and cocoon like place. In fact, when I was young it was the only room in the house that had a lock, creating a quiet sanctuary for me to be without question or interruption. In this series, I am not so much interested in my identity, but more the notion we have chosen to use bathrooms – private – to project a vastly public image into the world through social media.

Like #mrboxie, we are connected yet disconnected. My face is deliberately not defined in the paintings. Yet as paintings, which are archivable, they juxtapose against digital selfies that are only valid till the next one is constructed, my paintings are a monument to now.

If you enjoy these there is an exhibition in the Central Goldfields Gallery in Maryborough, Victoria, Australia from the 10th of September. Previews are available in Melbourne starting today. The online preview is here www.harleym.net

Much like a kid at the beach trying to save their sandcastle from the ceaseless rush of ocean – It is an almost endless process this painting thing.

But yet like most things, there is an end, or somewhere closer to the finishing line. I had a solo show open earlier this year and I had been playing catch up since returning from that seaside residency in February.

Out of interest I am showing you some of the paintings before (as they were in the show) and after, which I hope you will find as fascinating as I do. 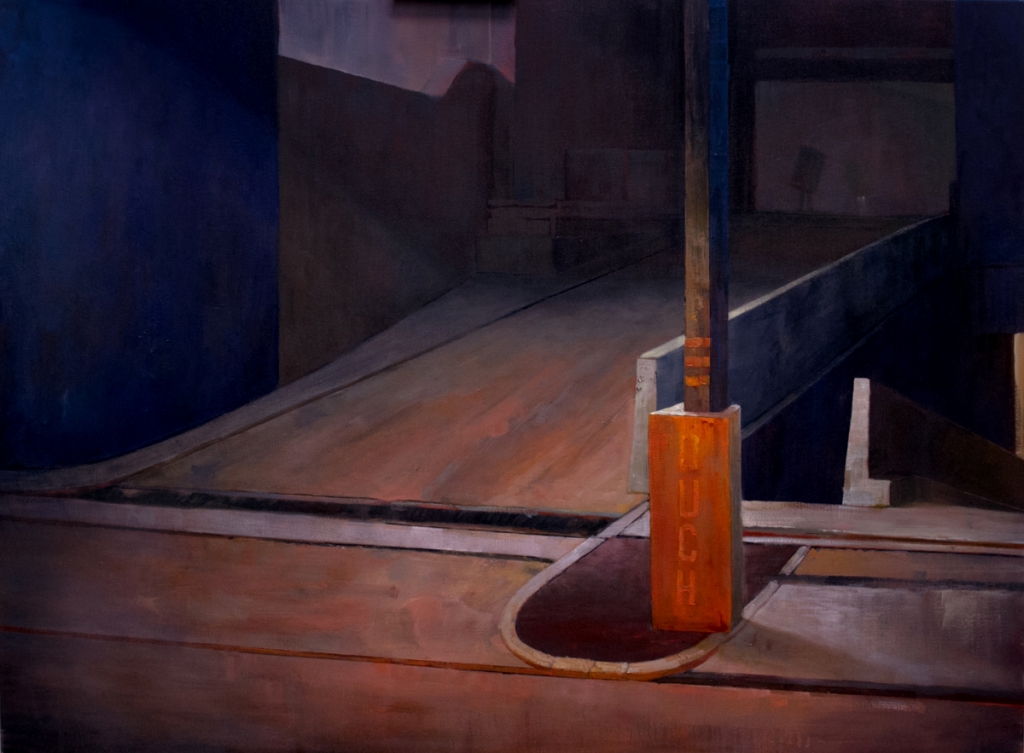 These are an interesting pair, it’s a little like spot the difference. I’m already seeing things I’d like to change… Again… 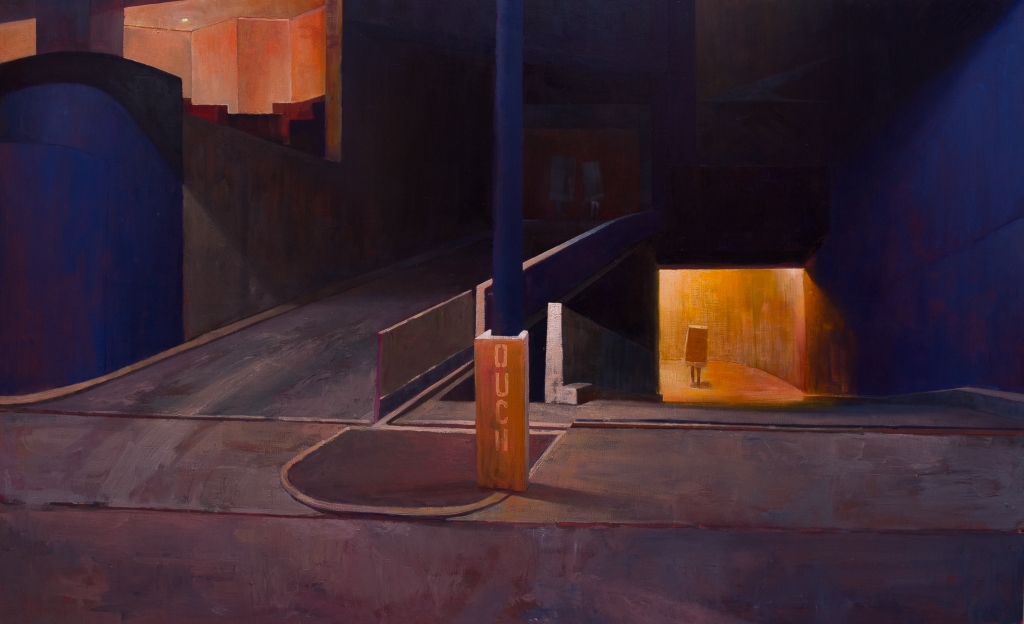 Fascinatingly the older version (top painting) looks somewhat better on screen – I am however certain that it is much better in person, at over 6ft across it is difficult to get a real feel for it on screen… Isn’t it pretty to think so? Thank you Hemmingway. 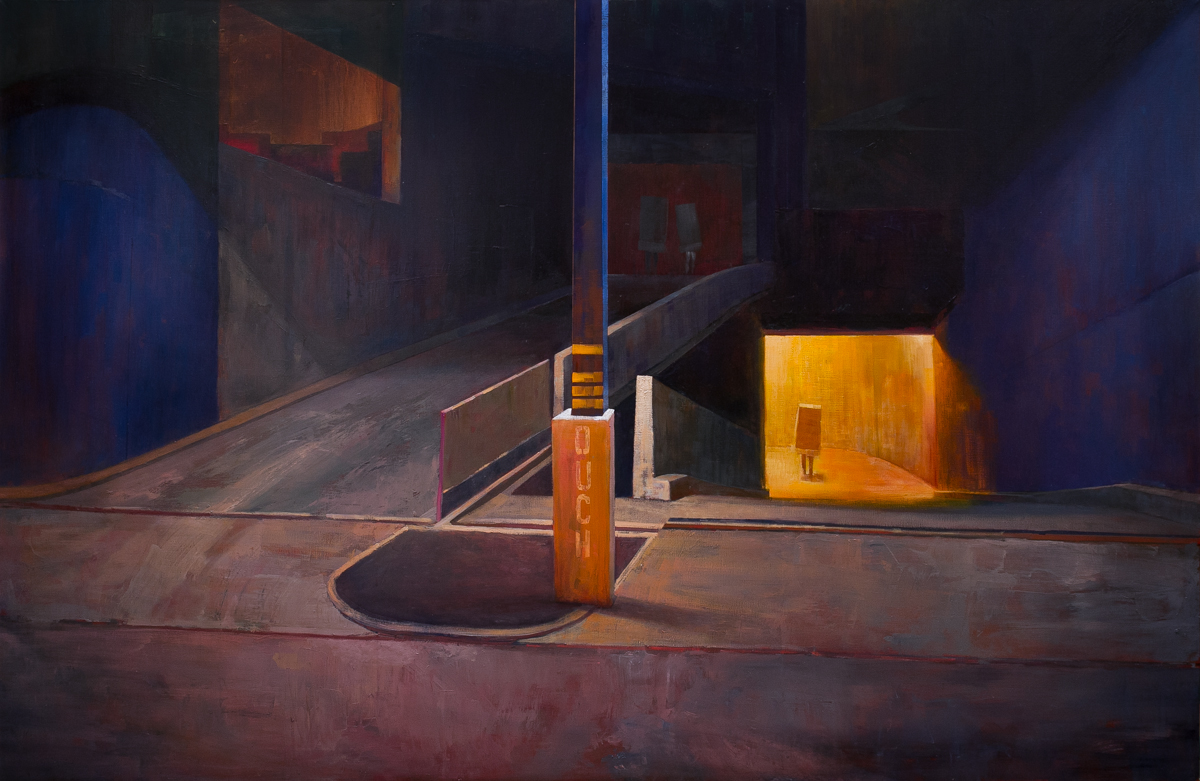 Hope you are having a great week so far! Feel free to come and visit the studio if you are interested in the paintings. There is always something interesting going on in here!

At the end of the last exhibition I was cornered(pun intended) by a few people who said they didn’t think the work was as intimate as it could be considering the situation, and that I was skirting around something and not facing it head on – although the works were dark, they weren’t intimate, they weren’t as engaged with the core of the exhibition as they could be. Considering that I had considered the title going from Close (as in closer) to Close (Closed) this was a bit of a painful revelation. The above paintings are the result of contained, don’t be surprised if the next exhibition is something completely different. After some recent close brushes I have a very new focus and it’s a subject I have not looked to before.

With my painting I am always trying to find the balance between happy mistakes through bold brushwork against perfection, I think there is a lot to be said for the ‘imperfections’ in paint, the little marks, scuffs and drag marks, areas where the medium has dripped – they are what I adore about it. It’s magic, you create an illusion for people to disappear. On this minuscule size, brush marks and dust can be the death of a whole painting.

The mistakes are like it’s life marks, that show that it’s been made by a human, who is not a computer, not a reproduction – and I like the idea that you can stand in front of the painting, and if you are close enough see where I have moved my hand. I love standing in front of paintings in the NGV and ‘feeling’ where the artist has moved – Next time you stand in front of a Rembrandt, take a second to remember that he stood in the same space you are…

To give the portrayal of an object without putting in every single detail of the object is my aim. If you go and look at some of Picasso’s later works, the abstracts, when you stand in front of them in person you can see the gouges as he has struck at the canvas with his brush and tore it across the surface to create not just a line but something more, an emotional outlet, a feeling, a strike. It is only in person that you can really, deeply appreciate a painterly art work. I hope you enjoy these works and get to see them in person. They are at RUBICON Gallery, Level 1, 309 Queensberry St. Melbourne VIC 3051 September 2nd – Opening 6 – 9pm – September 19th – Opening Hours: Wednesday – Saturday, 12-5pm

P.S. Don’t forget to look out for the little #mrboxie sculptures left around North Melbourne, you can find clues to there whereabouts through my Instagram https://instagram.com/harley_manifold_artist/ 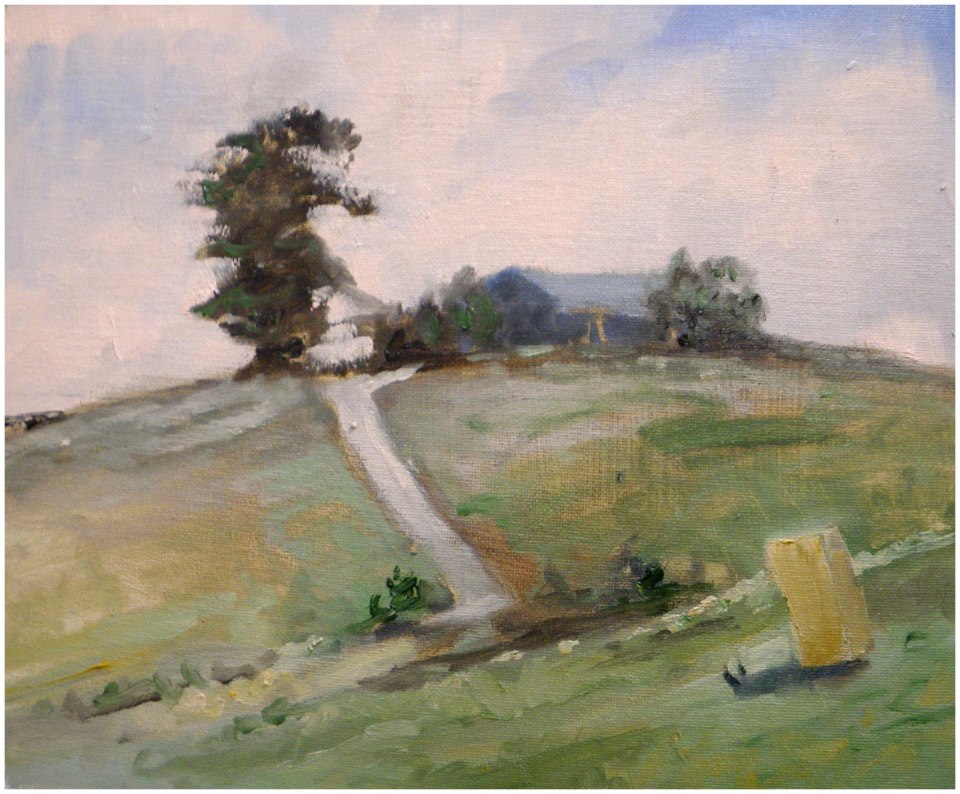 For many years I have driven past this place in Warrnambool and wished to paint the house on the hill which late in the evening changes into something more… There have been a few places I have wanted to do this and… Due to unforeseen events those places have been wiped off the face of the earth. Australia is tough.

I have an exhibition coming up in Warrnambool late this month so I am busily painting to have some new pieces for the show!

SOOOOOOOOOOOO THIS WEEKEND, wow tomorrow.. it is on. See you there…

Here is a little study of a study by Rick Amor, it is one of my favourites – though now sold. it is in my little open studio show.